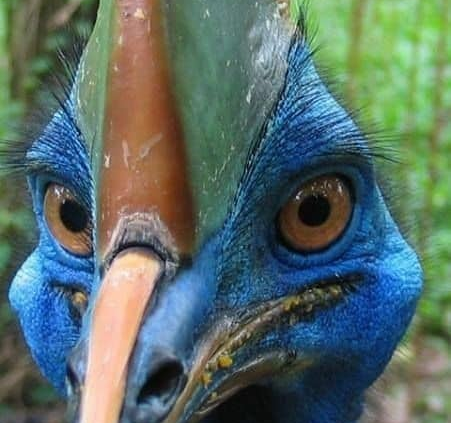 My Journey to An Ancient Rainforest

I joined a small group hoping to find one of the most astounding, endangered flightless birds in the world — its sanctuary, a tropical rainforest called Daintree in Queensland, Australia. The air in a rainforest drips, its humidity nearly oppressive, like a greenhouse gone feral, every scrap of light nurtures or denies life to some plant or tree, but in that throng of green, a flash of intense color – red, orange, purple, black of birds that disappear before you can train your binoculars on them.

A rainforest isn’t quiet, rather a place of incessant buzzing, chirping, drumming, and howling in the verdant shadows of gingers, breadfruit, fan palms, and mahogany. Our guide knew the local birds and mammals instantly either by sight or by their strange calls. Here, I was at a loss, as whole genera and families of plants and animals were unknown to me. Australia severed from Asia some 180 million years ago, and evolution followed an extraordinary, insular path.

Daintree is one of the most ancient rainforests with the greatest diversity of plants and animals on this island continent; and so far, protected from mining, cattle grazing, farming, and palm oil factories that have destroyed so many other rainforests around the world, worsening global warming (as burning down these forests releases untold tons of carbon that they have been faithfully storing for centuries).

On top of our list for this outing was the Southern Cassowary, Australia’s heaviest flightless bird. Like the emu and ostrich, the southern cassowary is a ratite, a large flightless bird with unusual feathers and other features that distinguish it from all other birds. A striking bird with glossy black plumage, the adult southern cassowary has a tall, brown casque (helmet) on top of its head, a blue and purple neck, long drooping red wattles and amber eyes.

The purpose of the casque is unknown, but it may indicate dominance and age, as it continues to grow throughout life. The First Peoples of Australia celebrated the cassowary and wove them into their beliefs, their stories of creation called The Dreamtime. There are customs, songs and dances about the cassowary, a prized source of food, hunting implements, and ornaments. They have a Dreamtime tale of how the cassowary got its helmet, when it saved the forest animals from fierce snakes, cracking them with its head. Hailed as their rescuer, the cassowary was never teased again about its inability to fly.

Each heavy leg has three toes, with the inside toe bearing a large dagger-shaped claw used for scratching and fighting. If we managed to see one, the guide warned us not to approach. Cassowaries prefer fallen fruit, but will eat small animals, fungi, carrion and plants. They are a rainforest gardener, one of only a few frugivores (fruit eaters) that can disperse large, seeded fruits over long distances.

Humans are affecting their survival through habitat loss, vehicle strikes, disease from domesticated animals, etc. In the Daintree, they are protected. Cassowaries aren’t common and could be hard to find, because even though they’re big and colorful, they can blend into the rainforest gloom. We were lucky that day as two wandered onto the dirt path late in the afternoon, when we were headed back to our jeeps. Only something real could look so unreal…