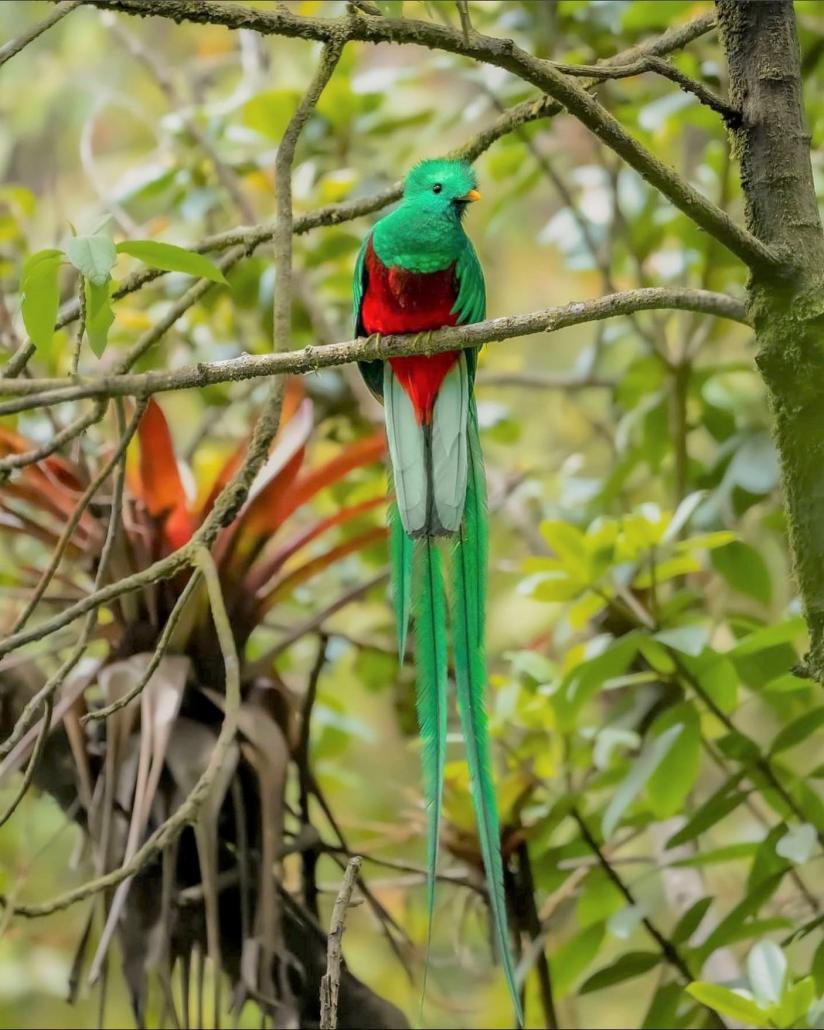 The Quetzals of Monteverde, Costa Rica

Somewhere on this earth, a place calls out to you, with an emotional power that could only be real. That place for me was Monteverde, Costa Rica in 1997.

I came to Monteverde with the hope of seeing a rare, beautiful bird, the Resplendent Quetzal; during mating season, male quetzals grow twin tail feathers that form an amazing train. Only nine years earlier, I voluntarily surrendered and settled with the federal government for burning draft files in 1969, protesting against the Vietnam War and racism. In 1969, I was working for the Quakers as a draft counselor. Why I’m mentioning my own life story will become clear as I tell this tale.

Monteverde! The memory is still undiminished in my mind. A ceiling fan lazily shooed gnats away as we all sat on the veranda, listening to the darkness, the darkness of a rain forest, its night creatures calling, feeding, a sharp whistling sound from Capuchin monkeys came from somewhere in the tree canopy. Our guide passed around a joint. I leaned back on a sagging sofa and looked up at the clear sky studded with stars, never visible to me in the artificial night of the city.

She told us the story of the Monteverde lodge, a story I was hearing for the first time, or was it my soul singing the story back to me? Her tale began in Texas during the time of the Korean War when I was only a toddler.

Four men refused to be inducted into the Army. They were Quakers, a rare pacifist faith that took the commandment of “thou shall not kill” seriously. It was a crime to refuse induction (as it was during Vietnam), and the Texas courts predictbly ruled against the resisters, jailing their leader. They decided to leave the US and sent scouts to many places, who came back with promising news about a tiny country called Costa Rica, who had abolished its army and welcomed foreigners who could help them.

In 1951, about hundred Quakers walked to Costa Rica from Texas with carts filled with tools and supplies to start small farms. They reached a lush valley and named it Monteverde, “Green Hills”. In all their efforts, they focused on preserving the cloud forest and its unique creatures, ultimately buying much more land to establish a protected place. The endangered quetzals only survive if their forests survive.

So, this Quaker ecolodge found me. I can thank the quetzal, my spirit guide, even if I might fail to see one on this trip, for honoring me with this extraordinary connection with these Friends across so many miles and years.

The woman next to me on the couch was a college student from Guatemala. She then spun another story, from a much more ancient past. In Mesoamerican civilizations, the quetzal was considered divine, associated with the snake god, Quetzalcoatl. It was a crime to kill a quetzal. The Mayan nobles wanted the bird’s long, magnificent tail feathers for headdresses, so the bird was simply captured, a few feathers plucked, and then set free. In several Mesoamerican languages, the term for quetzal meant “precious” or “sacred”.

To Guatemalans, the quetzal is the central figure in their legend of the hero Tecún Umán, a prince and warrior of the Quiché (K’iche’) Maya during the Spanish conquest of their land. The quetzal was his nahual (spirit guide). The Quiché repelled several attacks from the Spanish army, even though outmatched in weaponry. When Tecún Umán died, the bird swooped down and landed on his bloody body, leaving distinctive red feathers on its chest.

The bird represents freedom and is said to die of sadness if it is caged, evoked so well in the Guatemalan national anthem, which contains the words “rather death than slavery (antes muerto que esclavo sera)” in reference to the bird.

And my wish was granted two days later, when our guide spotted the elusive Resplendent Quetzal at last, sitting in a wild avocado tree, still, completely camouflaged in the green shadow. I couldn’t spot it for a long time. But then, I saw the crimson chest stained from the blood of the Mayan prince.
My spirit guide of the cloud forest, whispering freedom, oh freedom

Want to join the discussion?
Feel free to contribute!