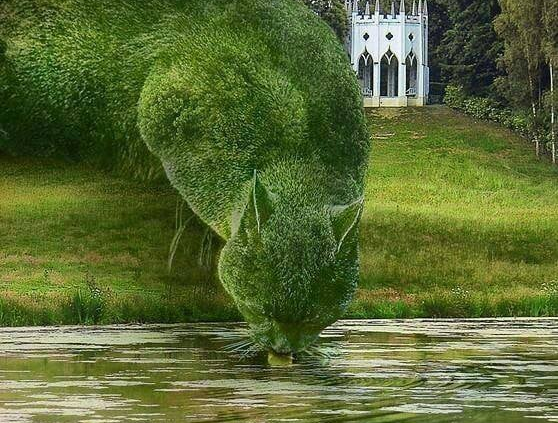 Astonishing Topiary of England and France

Topiary is the art of clipping hedges and trees into ornamental shapes. Topiary is ostentation, whimsy, a compulsive impulse to have nature resemble geometric contours or animals. A fine madness of human creativity; however, the opposite of Japanese niwaki, which seeks through minute pruning and training to create the illusion that the garden is completely natural.

Many gardens have a few topiary features like box balls or quirky creatures using fine-leafed evergreens, but it can be done with any plant theoretically, quite laborsome to maintain. However, it can transform a garden in winter when everything else is bare. In my garden, I inherited rectangular box hedges and some euonymus shrubs in half domes, but that’s the extent of my foray into topiary, as I prefer a natural, Provencal-inspired garden.

I can admire topiary in the right surroundings. Here’s the best of what I’ve seen and the stories these gardens tell — two English and two French.

Château de Villandry, département of Indre-et-Loire, France
This country estate was constructed in the 16th century by a senior official in King Francis I’s cabinet, around even an older 14th century tower. After all the vagaries of war and revolution, a major restoration project in 1906 brought back its topiary shapes and patterns. Villandry is known internationally for its glorious kitchen garden in Renaissance style, combining monastic and Italian influences. It consists of nine areas of the same size, but each with a different geometric motif of vegetables and flowers. These areas are planted with vegetables in alternating colors – blue leek, red cabbage and beets, green carrot tops, etc. – giving the impression of a multi-colored chessboard. Villandry is ostentation beyond measure, the grand ancestor of the humble French potager.
(photo 1)

Levens Hall, Cumbria, England
Touted as the world’s oldest topiary garden and unchanged from the 17th century, Levens Hall itself dates from the Elizabethan era. The house passed in 1689 to a colonel who was a treasury official for King James II. The colonel retained the King’s own French gardener, Guilliame Beaumont, who designed Leven’s complex and celebrated topiary garden, largely unchanged to the current day. There are over 100 individual pieces of topiary, some quite huge. Truly something suitable for the Red Queen in Lewis Carroll’s tale.
(photo 2)

Château de Marqueyssac and gardens, Vézac, département of Dordogne, France
On a site high above the Dordogne River is the 17th-century château and gardens built by Bertrand Vernet de Marqueyssac, Counselor to Louis XIV. To show his wealth and style, Bertrand had an extensive kitchen garden and terraces built, but no topiary. Only during the 1860s, a new rich, eccentric owner, Julien de Cervel, began to plant thousands of boxwood trees, today over 150,000, and had them carved in fantastic shapes, many in groups of rounded shapes like low hills or psychedelic brussel sprouts. He added linden, cypress, and stone pine trees, all a reminder of idyllic days on the “Grand Tour” in Italy. Named one of the “Notable Gardens” of France.
(photo 3 and 4)

Topiary Cat, Painshill, Surrey, England
Imagine walking through a beautiful English country garden, turning a corner and seeing a gigantic, perfectly-manicured cat sculpted from lush green bushes. The surrealist artist, Richard Saunders, once saw an ornamental shrub and was struck by how its shape resembled his beloved, deceased cat. One of his later images, which depicted a cat drinking water from a lake, was seen by millions on social media. The apogee of a fine madness.

Want to join the discussion?
Feel free to contribute!